My research is situated within the interdisciplinary fields of carceral geography, racial capitalism, and social movements with a particular focus on the US South. Through my research, I ask how and why a state turns down the path of mass incarceration, what are the dialectical relations between carceral state formations and racial capitalism, and how periods of carceral crisis can produce conditions of possibility for abolitionist activism that stretch us towards new geographies of freedom. In doing so, I examine how carceral state power is underpinned by and reinforces racist and patriarchal logics about violence and safety which in turn justifies state disinvestment in public forms of collective care and responsibility during periods of crisis. Central to my research is ongoing involvement and dialogue with anti-prison and anti-policing organizing.

My first book Carceral Crisis: Punitive State Power, Racial Capitalism, and Struggles for Abolition Democracy in Louisiana (under contract UNC Press) tracks the multiscalar formation and contestation of the Louisiana carceral state from the 1970s to the present day. I analyze the interchange between Louisiana’s turn to mass incarceration, the imperatives of racial capitalism, and the development of grassroots organizing by those communities targeted for heightened surveillance, policing, and imprisonment along lines of race, gender, sexuality, class, age, and geography. Through archival research, oral histories, and in-depth ethnographic research, I examine how Louisiana has expanded and consolidated its carceral infrastructure in response to multiscalar political economic crises and how it has adapted its carceral capacities when oppositional movements gain traction. I illuminate how Louisiana's rise as an epicenter of mass incarceration was produced through the interplay between different facets of punitive state power (prisons, jails, policing) in tandem with the global booms and busts of the oil economy and the rise of tourism capitalism. Yet, these periods of crises produce not only intensified carceral geographies but have dialectically formed spaces of possibility for oppositional politics, social movements, and coalition-building in the Black Radical Tradition. From prisoners instigating federal lawsuits, to community organizers building coalitions to shrink the New Orleans jail in the aftermath of Hurricane Katrina to young Black trans women aligning with Latinx reconstruction workers to contest racialized and gendered policing, grassroots movements have won victories that stretch us towards new geographies of freedom in the lineage of abolition democracy.

I am also currently co-editing The Jail Is Everywhere: Organizing Against the New Geography of Mass Incarceration (under contract Verso Books) with Jack Norton and Judah Schept. This collection examines how jailing has become an epicenter of mass incarceration and a pivot point of anti-carceral activism. Through the stories of campaigns against jail expansion, this volume illustrates the economic, political and ideological mechanisms that underwrite expansion efforts – from the incarceration of ICE prisoners in local jails to carceral humanism arguments for building “gender-responsive” jails as well as the collective ideological and material work of contesting jailing.

“Scaling Up or Scaling Back: The Pitfalls and Possibilities of Leveraging Federal Interventions for Abolition” Critical Criminology 26:3 (2018), 423-441.

“Organized Inside and Out: The Angola Special Civics Project and the Crisis of Mass Incarceration” in Souls: A Critical Journal of Black Politics, Culture and Society 15:3 (2013), 199-217.

“The Southern Coalition on Jails and Prisons,” in Remaking Radicalism: A Grassroots Documentary Reader of the United States, 1973-2001, Eds. Dan Berger and Emily Hobson, Athens, GA: University of Georgia Press, 2020.

"Law and Order Policies Make Us Less Safe. The Trajectory of the 90s Show Us Why" in Truthout. Posted September 13, 2022.

“Louisiana’s Turn to Mass Incarceration: The Building of a Carceral State” in the American Association of Geographers Newsletter. Posted February 1, 2018.

“Organizing the Prisons in the 1960s and 1970s: Prisoner Rights Round Table” in Process: The Blog for the Organization of American Historians. Posted September 22, 2016.

“Reflections on the Ten Year Aftermath of the Federal Flood” in Justice Roars. Posted August 28, 2015.

“Writing Across the Walls: Prisoner Journalism for Freedom” in The Abolitionist, Fall 2013

All Our Trials: Prisons, Policing, and the Feminist Fight Against Violence by Emily Thuma in Against the Current. July/August 2020.

Roll With It: Brass Bands in the Streets of New Orleans by Matt Sakakeeny in Southern Spaces. Posted online February 20, 2015.

We Shall Not be Moved by Tom Wooten in Shelterforce: The Journal of Affordable Housing and Community Development. Posted online November 1, 2012.

Arm the Spirit: A Woman’s Journey Underground and Back by Diana Block in Left Turn Magazine July/August 2009: 72-73. 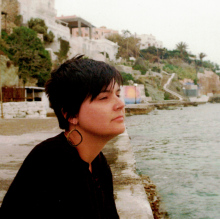