As one whose principal expertise lies in the application of computers to interesting problems, Michael Kennedy is deeply involved in the growing area of Geographic Information Systems (GIS). Since the early 1970s he has conducted work on "making a computer believe it's a map." He founded the GIS program in the Department of Geography in 1991. (He also initiated the Computer-Aided Design laboratory in the College of Architecture in 1967.)

Professor Kennedy is the author of the comprehensive textbook Introducing Geographic Information Systems with ArcGIS -- A Workbook Approach to Learning GIS, Second Edition, published by John Wiley and Sons, 612 pages, 2009 (ISBN 978-0-470-39817-3). A third edition was published in 2012.

Professor Kennedy's current projects include development of the Dot Probability Paradigm -- new approach for computer storage of geographic information that allows the user quality control with respect to fundamental and derived spatial data. He is also co-authoring, with Grady Clay and two others, a book on the jurying process that resulted in the design of the Vietnam Veterans Memorial in Washington, DC.

As part of his University service function he served three years (2001-2004) as one of two faculty members elected to the UK Board of Trustees. 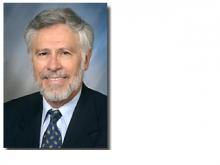