How to Orchestrate a War 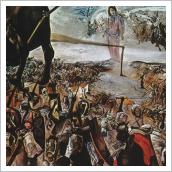 The Spanish-Moroccan War, known in Spain as the War of Africa, was a colonial military operation that resulted in the surrender of the city of Teto, the beginnings — and also the death throes — of Spanish colonialism on Moroccan territory in modern times. Spain’s military intervention in Morocco inspired an abundant literature whose aim was to glorify the war.

Rueda examines one-act plays on the topic of the War of Africa to reveal how war was staged and orchestrated politically through theatrical and musical performances. Burlesque musical representations of the War of Africa reinforce collective yet conflictive notions of national identity, still unresolved at the threshold of modernity, while exposing Spain’s impracticable political aspirations to regain its lost colonial power and the nation’s hesitancy to refashion itself as a modern nation.

In her 12 years at UK, Rueda has an exemplary service to the university and its students, as evidenced by the awarding of the 2012 UK Great Teacher Award and the 2013 Teacher Who Made a Difference recognition. In addition to her teaching, research and mentoring responsibilities, Rueda served as chair of the Hispanic Studies Department for nine years. During her tenure, she facilitated greater research and publication among faculty and graduate students alike and further consolidated the department's reputation as one of the best Hispanic Studies programs in the country.

In 2007 the Faculty Scholarly Activity Index ranked the department as the top program nationally in faculty productivity. In 2010, the National Research Council ranked the Department in the top 25 percent nationwide. Under her leadership, undergraduate instruction was revamped, and she secured funds to incorporate technology into undergraduate language courses. She also created an Honors Program in Hispanic studies and promoted quality teaching in both undergraduate and graduate offerings.